Completing all six World Marathon Majors is something I have dreamed of since I first started running and after completing London and Berlin marathons I was a third of the way there.

With the other WMMs being in the USA and Japan my next was going to be a long-haul affair. With that in mind I registered for Tokyo Marathon 2014 and anxiously waited until, on 26th September 2013, I received an email containing the magic word “Congratulations”. I was in and could not believe my luck. I had finally won a lottery!

As this was my first long-haul marathon calculating the best time to arrive to allow time to recover from jet lag was key. We opted to arrive four days before the race which was perfect.

We were based in the Minato district of Tokyo, about one hour from Narita airport; accessible to the popular areas of Roppongi, Shibuya and Shinjuku and 40 minutes away from the Expo venue, Tokyo Big Sight.

The expo was where Tokyo Marathon came into its own. The whole process was the most seamless, organised, and queue-less I have ever experienced.

The first desk was passport and bib number confirmation, from where I was guided to the number and chip pick-up desk and lastly, guided again, to chip check to make sure all my details were correct. Lastly, I was directed around to the end to collect my complimentary T-shirt and to the entrance of the expo itself. The whole process took no more than ten minutes.

From the peacefulness of the registration halls we moved into an explosion of noise and colour at the expo. It was the most vibrant and lively expo I’ve ever been to. It was sales, bright colours, music, loud hailers and tannoys blaring out from the various stands.

Expo day was topped off by an in-house massage by who could have been one of the oldest masseuses in Japan. Having a 75 year old jump around on the bed in my hotel room massaging my legs while Ro was downstairs was a bit strange. However, she was very good.

I was ready to go by 7.15 am.  It felt surreal to think I was about to run the Tokyo Marathon. On arriving at the station close to the start line runners were everywhere – it was like an ant colony and was mayhem for a few minutes. 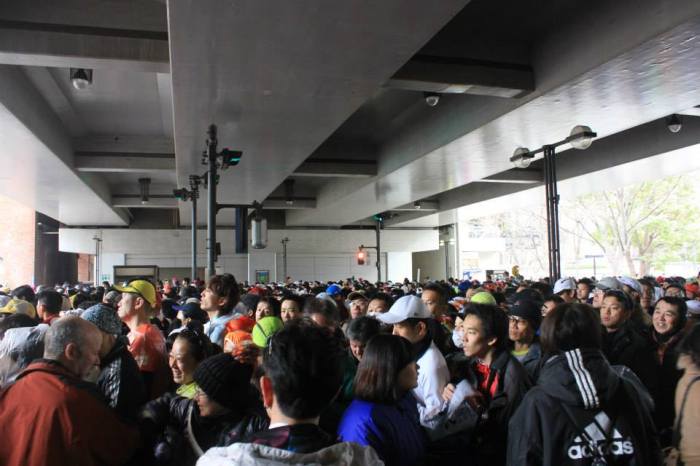 Greeted by this upon exiting the station

To get into my starting block, mine being block E and about 500 metres from the station and around a corner, l had to scramble through a bush and up some stairs. I seemed to be the only Westerner as far as I could see from my block. Cameras, TV crews, at one stage with five helicopters above us, I felt like I was in the Olympic marathon and had goosebumps all over.

The Japanese anthem blared out and then boom! The starting gun went and ticker tape was in the air, we were off. Within 7 minutes I was across the line however my Garmin satellite had not locked so I stopped once across the line to re-boot but due to the skyscrapers around, I presume, it would not kick in so decided to run using the time.

Turning my Garmin off gave me a sense of freedom like the old days. It was lovely just to run and enjoy the atmosphere and I even turned my music off within the first couple of kilometres so I could soak it all up which was great.

The realisation of running the Tokyo Marathon hit me again within a few kilometres resulting in me becoming a bit emotional.

Crowd numbers were decent over most of the course but there were some quiet spots at where it was easy to spot Ro. Supporters hung over barriers as we ran holding out their hands for high fives. Along several roads I high fived what felt like the whole street. It was amazing. Even the water station volunteers were holding out their hands.

Throughout the course marshalls stood roadside with bin liners collecting any rubbish left by runners and for toilet stops runners were guided down slip lanes formed to funnel you to a row of cubicles then back out again. Amazing!

Water stations were every 5 km with food also available from about 21 km. 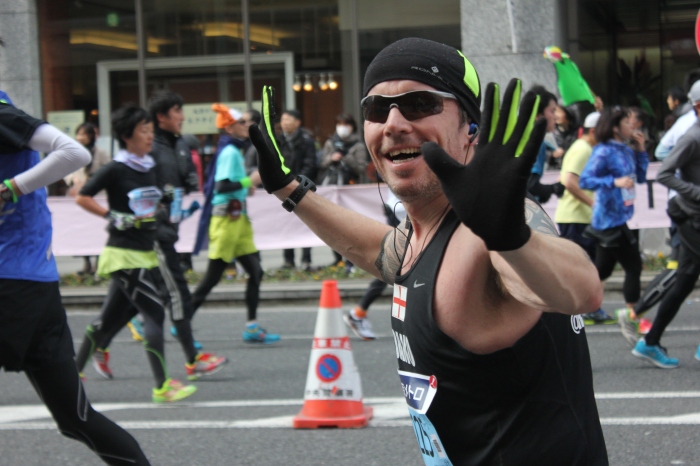 The course is on a loop for several kilometres from around the halfway mark which allowed us to view the elite athletes, who were 20 km in advance of us, flying past at a ridiculous speeds.

With the course being predominantly flat I was feeling fresh and in control for all 42 km and from glancing at the time on my watch when I crossed the start line, I knew that if I finished by 12.45 pm I would be in the the 3:30’s.

With the finish line being at the site of the expo, Tokyo Big Sight, it did feel distant from central Tokyo however crowds were good on the home stretch helping to push runners on.

Turning the corner onto the last road before the finish I saw Ro for the final time who running after me with her camera. A great boost.

Turning into the last 195 meters there it was, the finish however I was slightly disappointed to see the grandstands were rather empty. That was a bit of a downer after running all that way.

Crossing the finish line in around 3:35 I was over the moon. I had done it –  Tokyo Marathon, WMM number three done. I felt so proud!

Once through the finish line runners received a souvenir Tokyo Marathon towel, drinks, and a medal, all the while being congratulated and clapped by the volunteers and marshalls which again was a first for me. 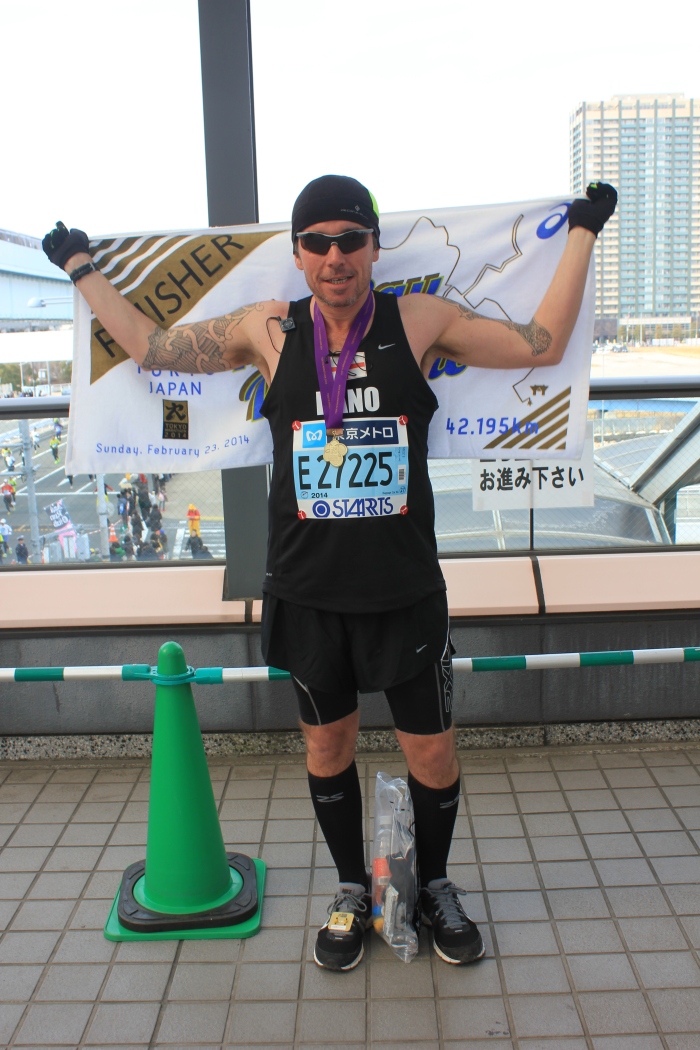 Out into the fresh air with my finisher towel draped over me and medal shining, it was time to meet my wing lady, the lovely Ro who followed me around the course, jumping on and off trains. I could not wait to see her, thank her, give her a hug and tell her my wonderful experience at the Tokyo Marathon.

Emotive Japan national anthem to start off the race

The Not So Good

A couple of inclines towards the end of the race

Not enough entertainment/bands along the route

6 thoughts on “Tokyo Marathon: Halfway to all WMMs!”